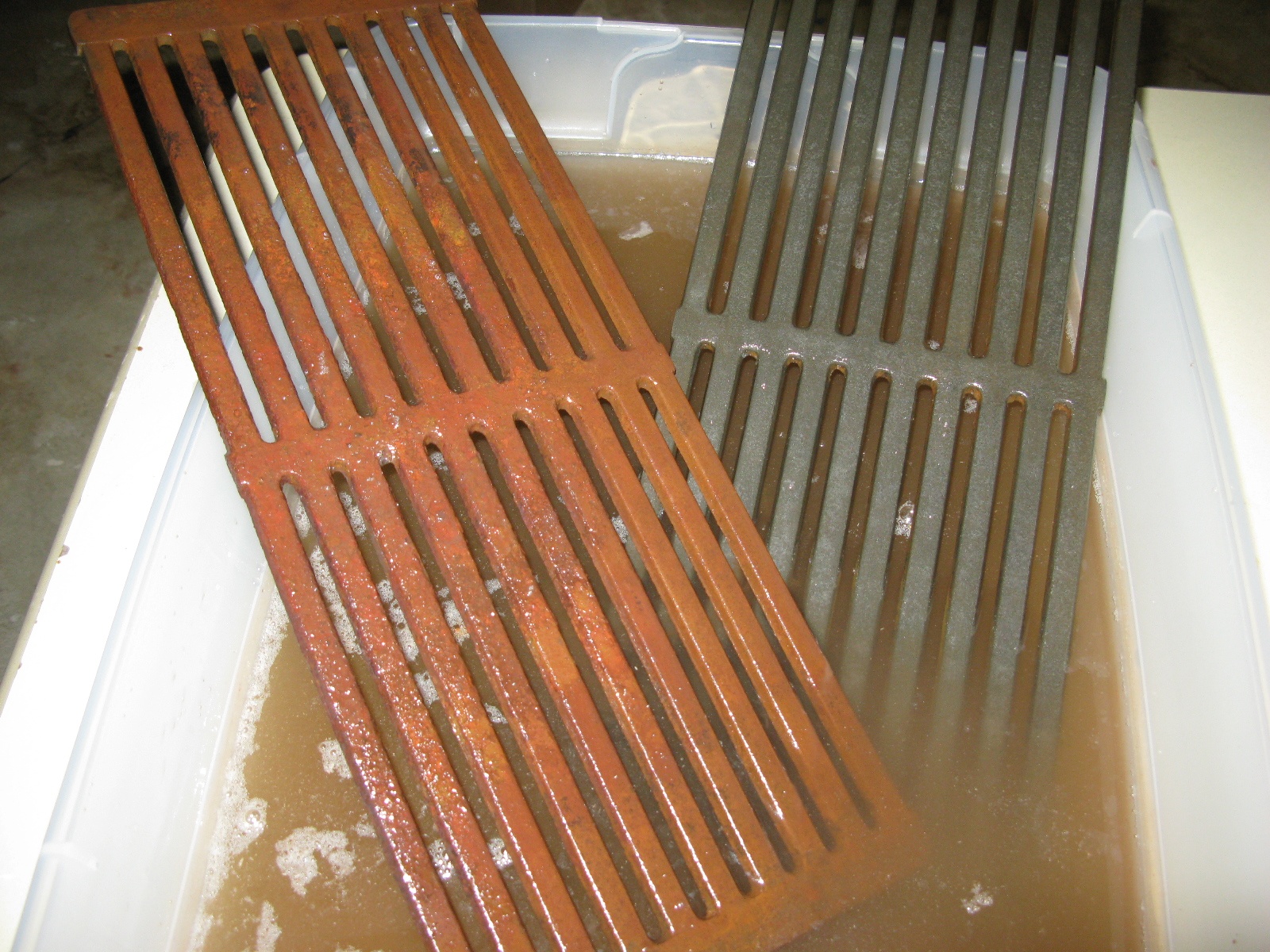 Here is an example of using a cheap acid to do the job, namely distilled vinegar.   In this example two of the rusted grill grates used in the post on Electrolysis are also de-rusted with vinegar.  As in the prior example, one heavily rusted one and one lightly rusted one were used.  The grates were previously cleaned by placing them in a self cleaning oven on a standard cleaning cycle.

The first task was to locate a container to hold the solution that was also large enough for the item to be treated.  Once a suitable container was identified (an old plastic storage box), a 50/50 mixture of cheap distilled white vinegar was made by putting in equal amounts of vinegar and water until there was enough liquid to cover the rusted items.   The next step was to allow them to soak.  At the 24 hour interval, they were removed and scrubbed.  You can see from the images that the rust is eaten by the acid, but it remains on the iron and needs to be removed so the process can continue.

I did not leave the heavily rusted grate in the acid solution longer than 72 hours because the acid also eats the iron.   It is important to note that the Vinegar/Acid is an equal opportunity erosion agent.  It simply eats away at any metal it has.  For that reason it is up to you as the human in the mix to keep checking on the item being treated for rust and to remove it when the job is done.

At 72 hours for the heavily rusted grill grate, I began to notice that I was starting to loose iron in the process and that leaving it in longer to get the tough areas would be counter productive.   Instead, I used a wire wheel and knocked the last bit of rust off (a wire brush would work as well).

An important last step in the process is to clean, dry and oil the cast iron.  You need to clean it with a base solution to offset/neutralize the acid.  I used and recommend “Washing Soda” as it is also the basis for the electrolyte solution used in the Electrolysis rig mentioned above.

When the cast iron is clean, place it in a 250 degree oven to REALLY dry out.  When it is bone dry and the pores of the metal are open, coat it with an oil of your choice then contemplate seasoning options (more to come on that topic!).

Some general words of warning:  This is really messy!  Don’t use a container that your significant other values.  Don’t do this in anything remotely resembling a finished area of your house!  The iron oxide and vinegar make a rough brew that stains everything.  Use gloves and eye protection, even though it is simply vinegar, you don’t want it in your eyes and you will have stained fingers and nails for a week if you fail to use gloves (speaking from experience!).  Finally, for heavily rusted items, the electrolysis rig is a much simpler and safer option as far as the health of the metal is concerned and is faster (24 hours versus 72 with little if any lost iron).

In favor of vinegar is the fact that it appears to etch the iron in a way that allows it to take seasoning better.  You can see this in the side by side images of seasoned iron grates, one of which was cleaned with vinegar and the other with electrolysis (post on seasoning to come).

2 thoughts on “Using Vinegar to Remove Rust from Cast Iron”