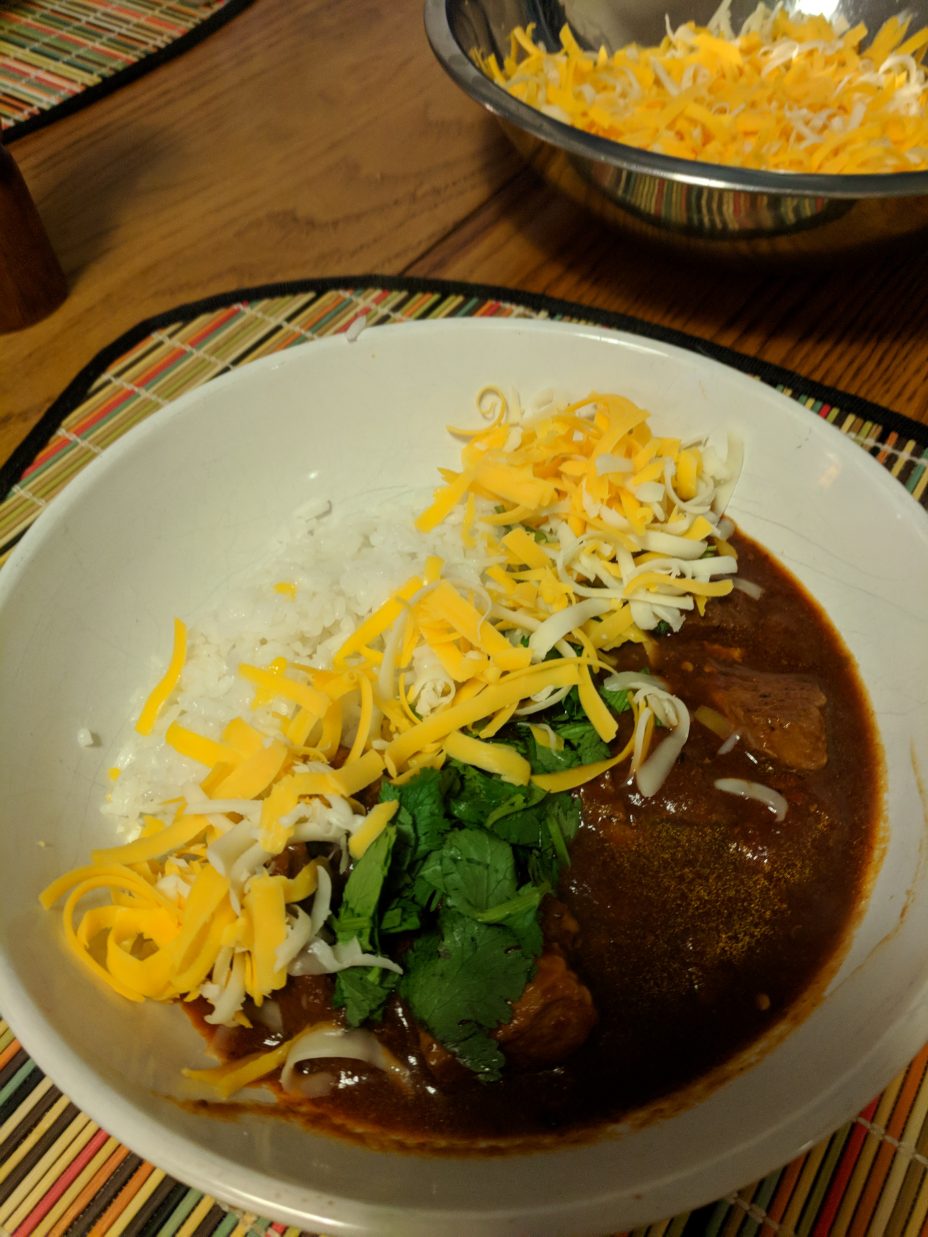 The are a lot of ways to make Chili.  Some use beans, all use spices, the original dish is simply a meat braise with spices.  Chili peppers of course!

The dish evolved from the amazing ability of Chili Peppers to dry then be re-hydrated, allowing them to be perfect trail food, keeping indefinitely after dried during the growing season.  This pairs perfectly with traditionally tough cuts of meat that benefit from a long cooking time (think wet BBQ).

The first step in an authentic bowl of chili is finding the chilies.  For that we have an abundance of options as Hispanic grocery stores are common now and you likely have one in your area.

3 to 5 pounds of cubed meat (pork/beef).  Don’t get hung up on what type of cut.  Generally you use what is on sale and what is cheap. 10 to 14 mixed dried chilies 2 small cans of Chipotles in Adobo  1 large can of crushed tomatoes  Beef stock or water for soaking 1 Beer for deglazing the pan Salt to taste

Even the smallest Tienda Latina will have a modest selection of dried chilies.  Mine has them in bulk boxes and sells them by the pound.

For about $2.00 I purchased a bag full of peppers.  They should be leathery, not so dry they crumble.  The Morita is a standard and is a Jalapeno that has been allowed to get ripe before being smoked and dried.  Great flavor, mild heat.  The Pasilla or Chile Negro is the dried form of the Chilaca chili pepper.  It is another standard with medium heat and rich flavor.  You could stop right there and have a great chili.  The Pulla has a medium plus heat and more of a fruity chile flavor.  The Guajillo has medium heat as well, amazing color and often stands on its own as a basis for a sauce such as for enchiladas and brings great color to the dish.  Note “medium” in this regard will be darn hot to folks without an appreciation for hot stuff.  Not familiar with them?  Taste them and decide if you want to use them.  Take a bit, chew it up and think about it.

Soak them in water or beef stock for half hour.  If you want a more mild experience, remove the seeds prior to soaking.  Wearing gloves while working with them is a good idea if you have sensitive skin or provide care to those that do.

I add two cans of Chipotle in adobo.  Two beers are essential, one for drinking and one for deglazing the pan after browning the meat.

Trim the stems off of the soaked chilies and add them to a blender with the Chipotle in adobo as well as the soaking liquid,   Blend until liquified and smooth.  There is no real measuring at this stage as you simply want enough liquid to allow the chilies to blend smoothly.

Cube up some cheap meat.  How much and what type?  The type is whatever is on sale.  Here is about three pounds of cheap pork (chops in this case on clearance) and two pounds of beef chuck, also on clearance.  You want cheap tough meat.  Other examples include boneless beef or pork ribs, pork shoulder or even basic mystery “stew meat”.  Just like in the pot roast dish, you are basically doing a braise and the meat will become soft as the connective tissue breaks down.  You want meat with connective tissue, not expensive cuts such as used for steaks.

Brown the meat on high heat in a large dutch oven.  Let the bottom get crusty and get some color on the meat.  When done, deglaze the pan with the set aside beer then add a large can of crushed tomatoes.

Add the chili mixture.  Stir and taste, adding salt to taste.  At this point you can add some optional items:  A chopped onion, some cumin or even some garlic.  I don’t.  Put the dutch oven into a 225 degree oven for four or more hours (five or six is ok too) with a cracked lid.  If you want thicker sauce, add a few table spoons of corn meal during the last hour.  Check it once an hour or so and add water or stock as needed to keep the liquid solid ratio where “you” want it.

The tough meat should break down in the oven and the chili flavors should merge and become entangled in the beef.  Some add very little liquid as they want a stiff textured dish, others like more of a soup.  I typically go in the middle.

Serve as you wish, but I like to serve it with rice, some freshly grated cheese and cilantro.  When I make it I end up freezing 80% of it as it makes several meals.  I put it into a vacuum bad and let it freeze overnight before sealing it the next day.